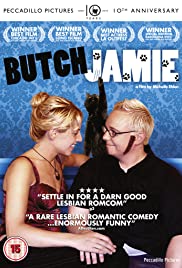 The film follows the story of Jamie, a struggling butch lesbian actress who gets cast as a man in a film. The main plot is a romantic comedy between Jamie’s male alter-ego, “Male Jamie,” and Jill, a heterosexual woman on set. The film’s subplots include Jamie’s bisexual roommate Lola and her cat actor Howard, Lola’s abrasive butch German girlfriend Andi, and Jamie’s gay Asian friend David.